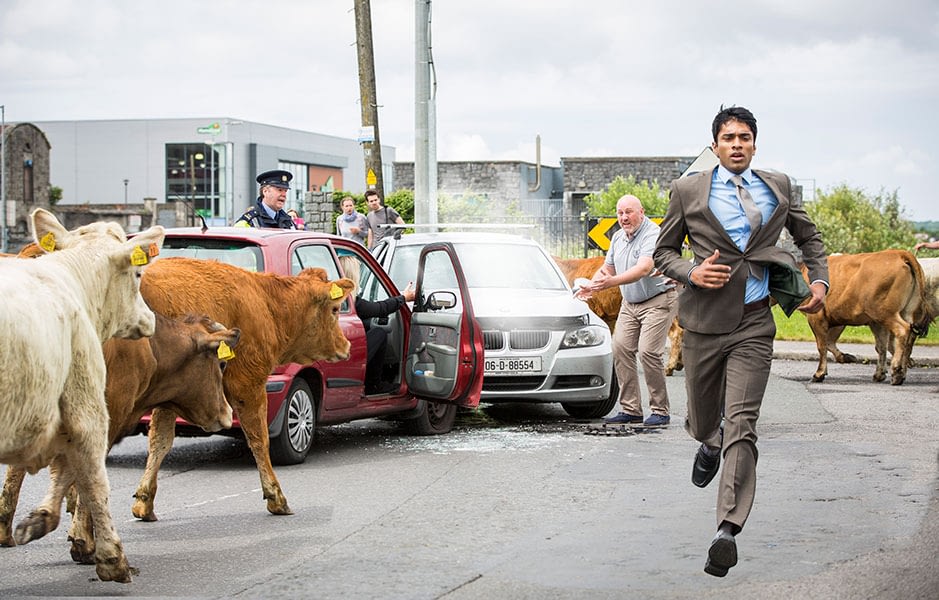 Here is what I would describe as possibly the maddest image I have ever taken. However this would be a lie, as in reality it is 4 separate images. The best parts of each photograph have been edited together to create the image above. In reality what you see above never really happened..

This was taken on the set of new Irish comedy film, Halal Daddy starring Sarah Bolger, Colm Meaney and Art Malik. This was a very hard scene to film, as the cows just didn’t want to play ball so to speak. As they say, never work with animals or children, and usually I don’t.

Almost always when working on film sets, time is something which no one has to spare. I have to work quickly and cause as little disruption to the cast and crew as possible. Also, when working with live animals, things don’t always go to plan. For this reason creative risks often have to be taken, but sometimes can pay off.

The cows in the picture just would not cooperate. Each time the man and woman involved in the car crash would shout and wave their hands, this would scare the cows and cause them to walk away from the scene. Because of this we needed many takes. However thanks to the constant lighting conditions, and some planning on my own part, I knew what was needed to bring the shot together.

The cows in the foreground are the exact same cows that are in the background, just photographed during different takes. Also the expression of the man involved in the car crash was my favourite during this take, but the main actor running was taken from a different take. During filming they were having some trouble creating enough smoke coming from the engine using dry ice, so I enhanced the smoke affect afterwords.

So by carefully editing a master image, I was able to select my favourite parts of each of the 4 images, and edit them together. In a similar way as they would in an editing suite when editing the film. I started with the left of the frame by choosing my favourite cows coming into frame. Then I concentrated on the cars and drivers arguing, then the cows to the right of the frame, and lastly the actor you see running into shot. I don’t normally heavily Photoshop my images, but in this scenario, the image wouldn’t have come together if I hadn’t. Also I like that fact that the image contains more than one focal point. Each important part of the image is in focus and draws the eye in.

I think the photograph came out really well in the end. It’s dramatic, and shows the chaotic scene unfolding. I feel it’s successful in getting the viewer to do a double take and question what the film might be about. You can view a trailer to Halal Daddy below.