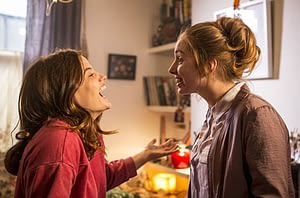 It’s been quite a busy year for me on set this year, with 2 feature films, a series for RTE, and a music video already under my belt. I’ve gotten to meet some great people, and work with some of the industries most talented. Although it can be a little crazy at times, I really love working on set as a publicity stills photographer, where the vision and inspiration continuously changes, and the office never stays the same!

Recently, in just one day my shooting locations included a squat, an art college and a jail cell. All completely contrasting scenes and setups to one another. Some other situations I’ve recently photographed on set include a nightclub and a group of belly dancers dancing in a meat factory. Like I said, the office continuously changes, and when I think I’ve seen it all, something new happens!

Some of the actors I’ve been lucky enough to work with so far this year include Colm Meaney, Cillian Murphy and Sarah Bolger. Unfortunately I can’t talk about the feature films as they have not been released yet, but I can speak about one of new RTE series entitled ‘Can’t Cope, Won’t Cope’, which I worked on over March and April this year, in conjunction with Deadpan Pictures. The 2 main actors in this are Seána Kerslake and Nika McGuigan.

This is a 6 part comedy drama series due to be shown on RTE this coming September. It’s about 2 girls in their 20’s from County Cork who are living in Dublin. It’s a comedy drama from the same production company that produced ‘Moon Boy,’ Deadpan Pictures. It follows the 2 girls as their lives and relationships start to spiral out of control. It’s very in keeping with today’s social landscape, as it touches a lot on the post Celtic Tiger era, and what it’s like for young people growing up today.

Written, directed, produced and staring women this will be a ground breaking series that I’m greatly looking forward to watching, and very proud to have been part of.

To see some more samples of my film and television work you can view my production stills portfolio by clicking here.